In the 1950s, cigarette companies began to learn that their product is a killer.

For decades, the tobacco industry denied the harmful effects of their products, minimising the link between smoking in pregnancy and smaller birth weights, concealing evidence that nicotine is addictive, and running extensive PR and lobbying campaigns to rubbish the connection between smoking and cancer.

In one notorious memo from 1969, a company executive from one of the major tobacco companies wrote:

“Doubt is our product since it is the best means of competing with the ‘body of fact’ that exists in the minds of the general public. It is also the means of establishing a controversy.”

The industry didn’t have to prove that their product wasn’t harmful – they just needed to create enough doubt, confusion and controversy to avoid being regulated, so the public could continue to decide for themselves – influenced, of course, by extensive advertising campaigns and expert scientists, all paid for by Big Tobacco.

It’s exactly the same tactics that Big Oil have been copying for years.

Sowing seeds of doubt about the causes of climate change, concealing their role in the climate emergency and hiding the harm that fossil fuels are doing to the planet, so they can continue to profit from the pollution they’re causing.

In fact, in 1998 a similar memo was leaked from the American Petroleum Institute, detailing how major fossil fuel corporations and industry groups were joining forces with think tanks and PR experts to convince “a majority of the American public” that “significant uncertainties exist in climate science.”

In 2000, US Republican pollster Frank Luntz produced a memo for the energy industry which read:

“Should the public come to believe that the scientific issues are settled, their views about global warming will change accordingly. Therefore, you need to continue to make the lack of scientific certainty a primary issue in the debate.”

These tactics of doubt and debate worked before, and for decades we’ve seen them work again in favour of fossil fuels. In some cases, Big Oil companies have even relied on the same scientists and think tank organisations that Big Tobacco were using in the 1960s.

It’s no coincidence that the mainstream media still regularly positions climate change as a debate.

Despite the fact that there is a clear consensus among scientists that climate change is real and happening because of human action, climate deniers can still be found in high up political positions, running leading think tanks, influencing policy and reporting for major press outlets around the world. And they’re funded by fossil fuel corporations.

This creates a web of power strong enough to delay or block government initiatives curbing emissions or incentivising the growth of renewable energy.

It’s estimated that the world’s five largest publicly-owned oil and gas companies spend about $200 million a year on lobbying to control, delay or block climate policy.

It’s all part of a long running plan by Big Oil to reshape the view of climate science in a way that favours the industries which stand to lose the most from regulating and reducing greenhouse gas emissions.

But as public awareness of the climate crisis (and its causes) has grown rapidly in recent years, Big Oil have been forced to start shifting their tactics.

Instead, they are now turning their attention to new forms of denial and doubt, whilst continuing to carefully manage their corporate image.

The consequences of climate change will affect everyone, regardless of political affiliation. Yet this non-partisan issue has been highly politicised for years, in ways which have repeatedly hindered more progressive action.

Focusing the conversation on policies and political conflicts keeps the focus away from effective solutions which should have already been implemented by now.

In the UK, the US and other high-emission economies, the climate is frequently positioned as a political issue. Making it a matter of ideological identity leaves room for doubt and debate where there should be none.

These are narratives funded by Big Oil and their supporters.

In the run up to the 2020 US elections, Fox News devoted more airtime to asking whether Trump’s attacks on a Green New Deal would cost Biden votes, than to educating audiences by discussing what a Green New Deal could do for the country.

Which is unsurprising given that climate denial claims dominated 86% of their climate segments in 2019.

Rupert Murdoch’s News Corporation (the company behind Fox News) is one of the biggest media monopolies in the world. While most people think of Murdoch as a media mogul, he also has financial interests in the oil industry.

Often carefully constructed ‘advertorial’ pieces of branded content will be sponsored and written by fossil fuel companies or their sponsored think tanks, carefully positioned in publications alongside editorial content written by real journalists, with small sponsorship disclaimers found in the small print – but easily overlooked. These function as propaganda pieces, but can easily be mistaken for credible environmental journalism if you didn’t know better.

Whether it’s fossil fuels, Big Tech or the media, no corporation with monopoly control welcomes government regulation. So it’s no surprise that dominant forces like News Corporation and the biggest oil companies would work together to influence political power in their own interests.

Instead of denying the science, Big Oil’s misinformation machine now keeps us fixed on a more subtle form of climate denial – the highly politicised idea that climate change is too expensive to solve.

In 2016, as President-elect, Donald Trump appeared to shift his position on climate from complete denial to anti-regulation.

When asked by the New York Times, he said that climate regulation was making it harder for US companies to compete in global markets – a significant shift from his previous statements that climate change is a “hoax” – but still equally unconstructive when it comes to climate action.

During his time in office, Trump hired several advisers with ties to Big Oil, and in his 2020 election run he received millions in campaign funds from fossil fuel companies who benefited from his approach of energy deregulation and tax cuts.

Economists suggest that we could fix climate change now, by spending just 1% of world GDP. But the fossil fuel industry continues to churn out propaganda that makes leaders believe it would be too expensive. What they fail to mention is that their industry currently receives $5.2 trillion in annual subsidies – amounting to 6% of world GDP.

Big Oil is spending billions trying to convince us that fossil fuels are necessary, and that the companies extracting them are working hard to fight climate change.

UK aid cuts resulted in a £1.9 billion cut to gender equality projects in 2021

In the first three months of 2020, Shell posted 5 videos to their YouTube channel. They all covered ways to cut carbon emissions.

The industry has spent $1.4 billion on advertising campaigns over the last decade to convince the public that they are part of the solution.

But in reality, Big Oil is investing 99% of industry capital in fossil fuels, and just 1% in renewable energy – an imbalance which is not at all reflected in the green, natural images that fill their adverts.

The industry continues to see climate change as a PR problem.

Big Oil ads are most often shown on political news outlets, targeting a politically active demographic. In the US, when Congress is considering climate legislation, fossil fuel ad spend goes up.

Even as we look towards a greener future, the direction and speed of travel is being dictated by the very industry giants that created the problem (and profited from it) in the first place.

Big Oil is controlling the climate conversation using the same tactics Big Tobacco used to avoid regulation for years, despite the harm caused by the industry being widely accepted as scientific fact.

Research has revealed that Big Oil firm Exxon knew in the 1970s and 1980s that global warming was being caused by human activity. In response, they launched huge misinformation campaigns by funding think tanks to manufacture doubt.

We now know that fossil fuels kill 1 in 5 people worldwide, due to air pollution alone. This death toll exceeds the combined total of people who die globally each year due to smoking, plus those who die of malaria.

Big Oil saw this coming. They have continued to double down on a profitable but harmful business model, and spend more lobbying against green progress than fixing the damage they have done.

Just as the tobacco industry misled the public on the harms of smoking, the fossil fuel industry has built such a powerful, global, climate denial machine that we’re now running out of time to stop the destruction and maintain liveable temperatures around the world.

Several US cities and states have now sued ExxonMobil and other fossil fuel companies for fraud, damages or denial. Perhaps unsurprisingly, Big Oil is using the same lawyers that defended Big Tobacco.

The Guardian banned all advertising from fossil fuel firms across their media outlet in 2020, and there is a growing movement of PR companies and advertising agencies refusing to work with climate intensive industries, including Big Oil. Fossil Free Politics is also campaigning to uncover the political influence of the industry and stop the lobbying.

We know we’re running out of time to tackle the climate crisis. Conscious consumers are left frustrated that their individual actions feel too small to make a difference, and annoyed that global leaders don’t seem to be taking the problem seriously or acting quickly enough.

Perhaps it’s because there’s a billion dollar industry behind the politics and the media, peddling corporate propaganda and pulling the strings?

It took four decades to dismantle the power and influence of the tobacco industry, and bring in regulations. And yet there are still close to a billion smokers worldwide today. When it comes to Big Oil, we don’t have the time. Climate inaction is no accident – it’s straight from the Big Tobacco playbook, and we can’t afford to let it continue unchallenged. 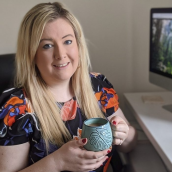 Sian is a brand, marketing and communications strategist, sustainability expert, author, and Founder of #EthicalHour. She was the UK Sustainability Influencer of the Year and published her book 'Buy Better Consume Less' in 2021, building on her extensive experience of helping Big Why Business Founders start and scale eco-focused brands and take them mainstream.

Sian is a brand, marketing and communications strategist, sustainability expert, author, and Founder of #EthicalHour. She was the UK Sustainability Influencer of the Year and published her book 'Buy Better Consume Less' in 2021, building on her extensive experience of helping Big Why Business...

When you can’t read anymore about climate, take action

You can find out more about which cookies we are using or switch them off in settings.

This website uses cookies so that we can provide you with the best user experience possible. Cookie information is stored in your browser and performs functions such as recognising you when you return to our website and helping our team to understand which sections of the website you find most interesting and useful.

Strictly Necessary Cookie should be enabled at all times so that we can save your preferences for cookie settings.

If you disable this cookie, we will not be able to save your preferences. This means that every time you visit this website you will need to enable or disable cookies again.